Teradici partner RFX connected artists to workstations from their homes.

The crisis affected all of Crafty Apes’ 150 visual effects editors, who work on high-end post-production projects. The company‘s recent credits include Birds of Prey, Hustlers, Jumanji: The Next Level, Star Trek: Picard and The Way Back.

Since Crafty Apes formed in 2011, editors and artists have typically performed their postproduction tasks at one of its studios. The main studio is near Los Angeles, but Crafty Apes also operates facilities in Atlanta, New York City and Vancouver. In early March, Crafty Apes expanded to Baton Rouge, and it plans to add a studio in New Mexico.

As offices started shutting down in March, like all other nonessential businesses, film production ground to a halt. But Crafty Apes had plenty of film and animation content already in the queue that was ready for post-production.

Enabling the visual effects studio’s employees to work from home was important to keep the pipeline of releases on schedule.

Crafty Apes called on RFX to come up with a practical way for its artists to remotely access their workstations. RFX, a hardware, software and services provider also based in the L.A. area, is Crafty Apes’ longtime technology provider and adviser.

“As the coronavirus started hitting, a lot of the studios were in a state of panic,” said Prashant Buyyala. Buyyala leads technology initiatives at RFX.

Establishing remote access for graphic artists has unique requirements. It is more complex than setting up office workers to share documents or connect to customer service systems.

Crafty Apes’ artists use workstations that run compute-intensive software such as Nuke, Houdini, Autodesk Maya and Adobe Photoshop. And of course, visual content can amount to gigabytes, or even terabytes of data.

“There are severe constraints around the security implications of it, Buyyala explained.

“There are also workflow issues with regard to the large datasets that they’re working with. Some people just wanted to move the workstations home, then have the employees connect over a VPN. But that doesn’t work very well. So we really started quickly mobilizing our teams to try and take a look at the various technology solutions out there.” 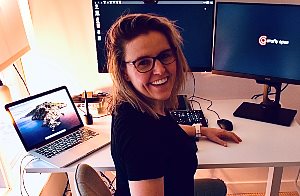 Crafty Apes’ Aleks Siekiewicz gets ready for another day of visual effects work at Crafty Apes.

“It is the kind of software that works with media and entertainment clients,” said Cliff Edson, RFX’s general manager. “They can’t just get on and do Zoom, because of the amount of information that’s going back and forth.”

It helped that the visual effects studio already had an internal VDI platform based on Teradici’s PC over IP protocol.

“Since they were already using PC over IP in the office and for their remote branches, they were able to just extend that network to the home users,” said Ziad Lammam, Teradici’s VP of product marketing.