(Pictured above: The Samsung Galaxy XCover Pro, which debuted at the National Retail Federation’s Big Show in New York City.)

NRF BIG SHOW — Samsung is extending its push into the market for first line workers with the launch of a semi-rugged version of its Galaxy smartphone.

The Galaxy XCover Pro, introduced over the weekend at the annual National Retail Federation Big Show in New York, is aggressively priced at $499 and will include a push-to-talk button integrated with Microsoft Teams.

While the Samsung’s new Android phone isn’t as rugged as more industrial grade devices from the likes of Zebra and Panasonic, it isn’t as expensive and it’s not intended for extreme environments. It’s targeted at customer-facing workers in verticals such as retail, health care and field service that may need something that can withstand more wear and tear than its consumer-grade Galaxy Note.

Samsung’s Galaxy XCover Pro looks and feels more like Samsung’s flagship Galaxy smartphone but is engineered with an IP68 water- and dust-resistant and is MIL-STD 810G rated. According to Samsung it will withstand drops of five feet without a case. Its 6.3-inch FHD+ Infinity Display has a touchscreen optimized to work in adverse conditions such as rain or snow and for workers wearing gloves. It has a replaceable battery and two SIM card slots.

At half the price, Samsung believes the Galaxy XCover Pro won’t have many of the bells and whistles of the latest high-end Galaxy Note such as support for Wi-Fi 6 or its DeX feature. But it believes it will appeal to customers who would like to equip all their firstline workers with their own phones to enable them to access information for their respective customers.

“It’s a mid-range device that gives us the ability to compete with much higher end devices from some of our competitors,” said Samsung Mobile channel chief Mike Coleman. “It’s much less expensive from cost of acquisition as well as cost of ownership.”

“We’re taking what we’ve learned on the consumer side and transforming that into a B2B solution set,” Coleman said.

Samsung will promote the new device with marketing programs and incentives, to be revealed closer to the ship date, set for the first half of this year, according to Coleman.

Observers said Samsung is making an aggressive push into the market.

“It’s a very attractive price,” said independent industry analyst Jack Gold of J. Gold Associates. “Samsung is going after the midmarket frontline worker at companies that don’t have to spend $2,000 or $3,000 to give each employee a device. While it’s not fully rugged, it’s much more rugged than a typical smartphone.”

Customers can use the push-to-talk feature of the Galaxy XCover Pro to invoke any function on the device, but officials emphasized that it will automatically launch Microsoft Teams via the “walkie-talkie” feature Microsoft is announcing for Teams at the NRF event. 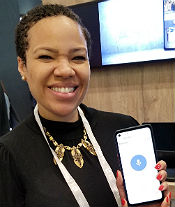 ”For firstline workers, now we’re enabling persistent push-to-talk communication with integration on the X Pro,” James said. “There’s been high demand for this from our customers.”

“We use Microsoft Teams every day for text and voice chat and this is a brilliant move,” Ungs said.

Ivanti is a launch partner for the new phone for customers. Ivanti Wavelink, the is a terminal emulation tool, will be among the various accessories offered with the new phone.

Another launch partner is Verizon, which will be the first to offer the new phone. While the agreement with Verizon and its channel partners will let them offer the new phone first – similar to a deal last year with the carrier to offer its first 5G-capable Galaxy phone – it’s not an exclusive arrangement. Samsung will also offer an unlocked version, and subsequently with other carriers.

The phone will also include Samsung POS, the company’s point-of-sale offering that will work with Visa’s Tap to Phone pilot program.

Previous Post A Showcase of Innovation and Inspiration at Ingram Micro ONE 2019 Next Post D&H Distributing Preps for Big Year, Beginning with RingCentral Agreement