One Azure Networking exec says the strategy is to build a “global computing infrastructure substrate.”

Microsoft is preparing to launch not just one edge computing service, but three, one each for industrial connectivity on a 5G private network, standing up a mini Azure region closer to your customers, and offering cloud services that run inside a carrier network.

Connectivity and the amount of compute available differ from service to service. But for developers who will place workloads on them, the company is promising the same experience as in every other flavor of Azure — although for a limited set of Azure services. That promise of consistency applies across Azure public cloud, Azure Stack Hub (the on-premises version), Azure Stack Edge, or the Azure Arc control plane for Kubernetes clusters in non-Azure clouds. What you run where is a deployment decision, not one dictated by the development or operational model.

Azure Edge Zones, which Microsoft started previewing at the end of March, are meant to bring that consistency to applications that need to run at the edge for extremely low latency. The three new services are Edge Zones, Private Edge Zones and Edge Zones With Carrier. They cover multiple “edge” types and use cases. Those include more localized regions than the core public cloud with latency of ExpressRoute; Azure with 5G through a carrier; and Azure in private industrial or retail deployments with 5G connectivity.

“These are typically cages in exchange points,” said Yousef Khalidi, corporate VP for Azure Networking. “They are the same locations where we typically have ExpressRoute, where we have Azure Front Door [for web traffic routing optimization], where we have our CDN services, where we have our routers. They have the right security and compliance regime to enable you to host compute.”

Azure Edge Zones with carrier puts that same Azure hardware into a carrier-owned data center. In both cases it’s the same hardware used in standard Azure cloud availability regions. “We actually use the same supply chain, the same mechanism we have to send the hardware to the right location and make sure it is secure. … And that’s how we’ll scale the locations,” Khalidi explained. 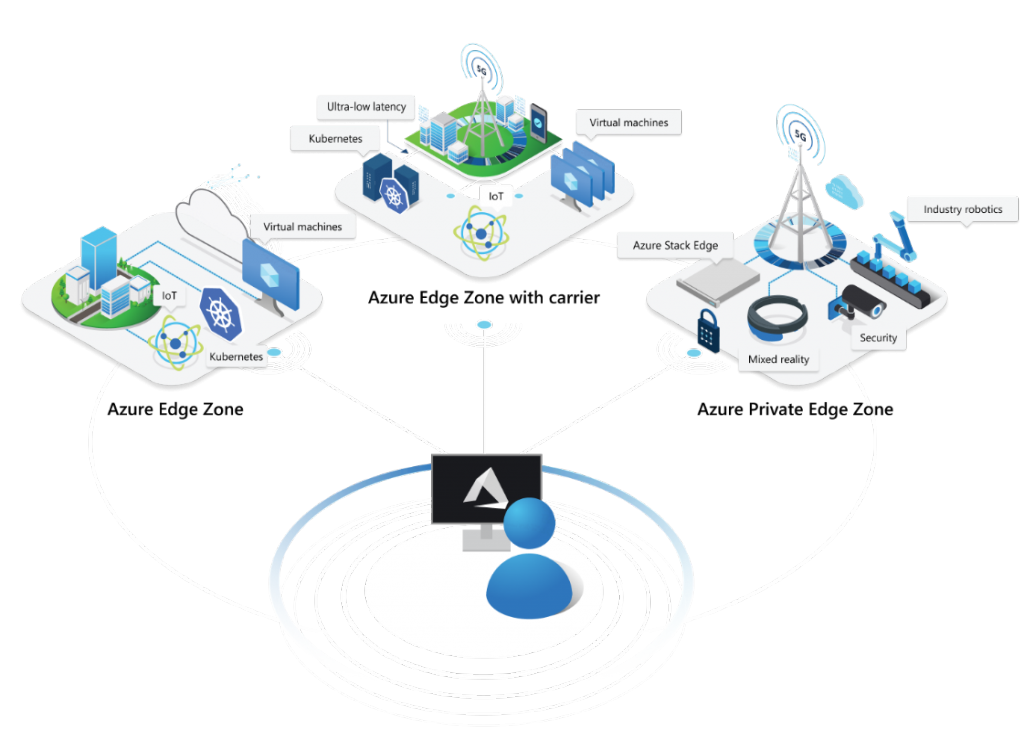 The carrier version of Edge Zones is tightly integrated with both the carrier network and the Azure network. That’s what Microsoft has spent the last year testing with AT&T, which will be the first carrier on the service. It wants to make sure to avoid “tromboning” a mobile connection to another location and back.

“Traditionally, with mobile networking, that [packet] would have gone all over the universe before it got where it was supposed to be going,” Khalidi joked.

The degree of integration with their network is up to each carrier. And how fast devices on their networks can reach the edge zone will be part of their differentiation. In time, Azure plans to let developers take advantage of that to …