A step up from the free version of Teams, the Essentials release is optimized for Microsoft Cloud Service Providers (CSPs).

Microsoft has launched Teams Essentials, a version of its collaboration and communications solution optimized for small and midsize businesses (SMBs). The scaled down standalone iteration of Teams, released Wednesday, removes some restrictions from Microsoft’s free version.

Notably, video meetings and calls with Teams Essentials can run up to 30 hours, rather than just 60 minutes. Teams Essentials subscriptions, $4 per user, per month, provide group chat, file sharing and calendaring. The Essentials release also includes Teams features such as the meeting lobby, custom backgrounds, Together Mode and closed captioning.

Teams Essentials offers 10 GB of file storage, compared with the free version’s 5 GB limit. Another benefit versus the free version is 24×7 phone and web support. Besides integration with Outlook calendar, Microsoft is offering support for Google Calendar. It also includes a group chat template designed to help create a project and setup meetings.

“With Teams Essentials, small businesses from restaurants to retailers to professional services can easily meet, collaborate, communicate and serve customers in new ways,” according to the announcement posted by Microsoft 365 corporate VP Jared Spataro.

ZK Research principal analyst Zeus Kerravala described the addition of Teams Essentials for SMBs as a necessary move by Microsoft.

“It’s not the easiest or the cheapest vendor to work with, which is why so many SMBs have shied away from Teams,” Kerravala said.

“The lighter version gives smaller companies the features they need at a fair price,” he added. “Teams isn’t a great product compared to Webex and Zoom, so it can’t also be the most expensive for customers that do not have enterprise licensing agreements.”

“I recommend that $5 per user, per month, is a better alternative that gives access to security, considerably higher cloud storage, business-class email, meeting recordings, transcriptions, and Microsoft productivity apps,” Agrawal said. “I believe that Microsoft potentially considers the Essentials offering as a get-in-the-door strategy and not a long-term practicality for small businesses.”

Specifically, the $5 per user, per month, Microsoft 365 Business Basic includes everything offered with Teams Essentials. Additionally, users get up to 1 TB of storage and support for recording meetings with transcripts. Microsoft 365 Basic also includes select Office apps, security and Exchange email service.

While customers can buy Teams Essentials directly, there’s also a version that Microsoft Cloud Service Providers (CSPs) can deliver. This Teams Essentials version includes the same commercial-grade meeting capabilities, chat, channels and file collaboration offered with Teams via Microsoft 365 suites, according to a post by Dan Truax, general manager for global partner programs. The difference, he noted, is that it doesn’t require customers to use Microsoft 365. 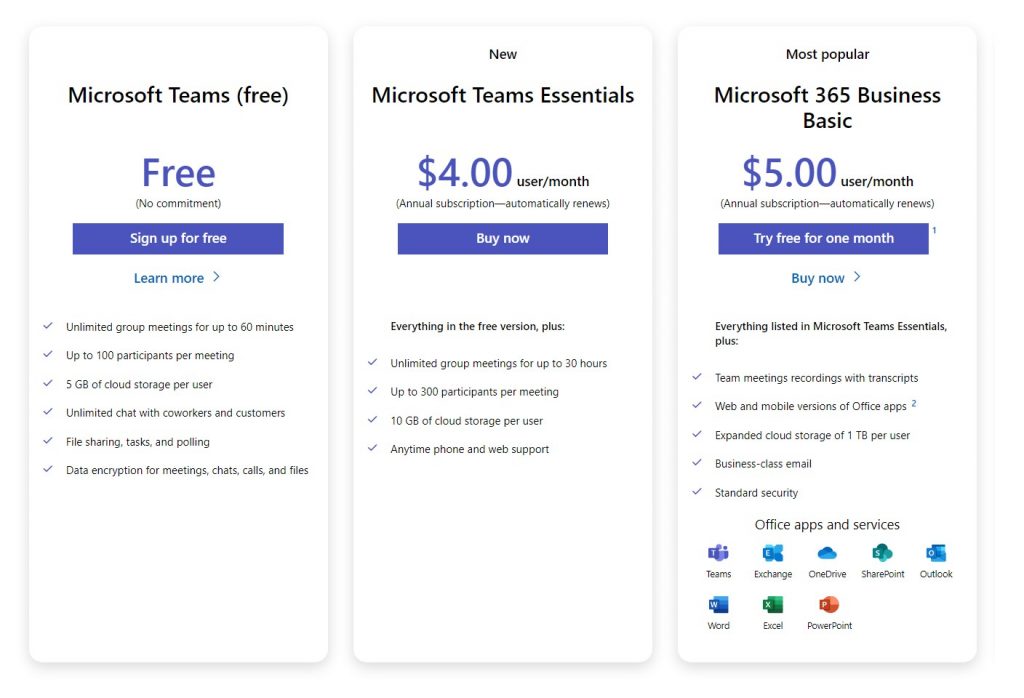 “Teams Essentials is built for partners, with full manageability and the ability to easily transition into more advanced Microsoft 365 for business suites as customer needs grow,” Truax noted. “With Teams Essentials, small businesses will be able to grow their businesses with Teams easily and at a low price.”

Truax added that partners can deploy Teams Essentials to set the stage for replacing legacy PBXs with Teams Phone System. It is also suited to small businesses with frontline workers, he added, plus, ISV apps that support native Teams integration.