It’s aimed at multitaskers. But should it really ship before Windows 10X is ready?

Lenovo aims to ship the first foldable Windows laptop with the debut of the ThinkPadX1 Fold, which in addition to folding will offer optional 5G wireless WAN connectivity.

The folding laptop is one of two 5G-capable mobile PCs that Lenovo is launching at the Consumer Electronics Show (CES) in Las Vegas, where Dell and HP have also introduced their first 5G laptops. But Lenovo, which first showed a prototype of the ThinkPad X1 Fold last May at its Accelerate conference in Orlando, is emphasizing the opportunity to stand out with its new category of laptops with displays that can fold and enable multitasking on different sides of the screen.

To get in front of its key rivals, Lenovo isn’t waiting for Microsoft’s new dual-screen optimized Windows 10X operating system to arrive. Instead Lenovo will ship the ThinkPadX1 Fold midyear with the standard Windows 10 OS and offer Windows 10X when Microsoft releases it.

Microsoft recently revealed plans to offer Windows 10X, a version of the operating system optimized for dual-screen, foldable devices by supporting multitasking across displays when it showed prototypes of its own planned Surface Duo and Surface Neo devices. Microsoft is still developing Windows 10X and Lenovo doesn’t anticipate that it will be ready when the company is prepared to release its system.

“We wanted to get this in the market, and we’re ready to go,” said Rob Cato, Lenovo’s VP of North American channels. “It still can provide a great user experience with Windows 10 Pro and then it will have the ability to upgrade from there to Windows 10X.”

Not everyone believes shipping early without the Windows 10X software is a good idea. Dell, which also is showing a preview of two different foldable laptops at CES that are planned for later this year, is decidedly waiting for Windows 10X to arrive.

“We wouldn’t ship Windows 10 with this type of product; it’s not designed for it,” said Umang Patel, a Dell technology and innovation leader for device and solution strategies.

“I believe Dell’s decision to wait for Windows 10X is sound,” said independent analyst Charles King of Pund-IT. “The foldable concept devices that Dell displayed included features that seemed unusual compared to current Windows PCs, [such as] some multitasking functions, seamlessly shifting from single to dual screens when the device was folded slightly.”

The Dell Concept Duet has dual 13.4-inch displays that let users multitask on each one; for example, a user could use one screen for a video conference and the other to take notes or perform other tasks. The other Dell laptop, the Concept Ori, has a single, foldable, 13-inch screen and keyboard, making it more portable. Unlike the Lenovo ThinkPad X1 Fold, which the company said is “expected” to start at $2,499, Dell isn’t releasing the price of its Concept Duet or Concept Ori.

Lenovo’s ThinkPad X1 Fold is targeted at business users, will have an OLED-based 13.3-inch foldable display developed by LG Electronics. It will weigh 2.2 lbs with an electronic keyboard or Lenovo’s Bluetooth Mini Fold Keyboard. 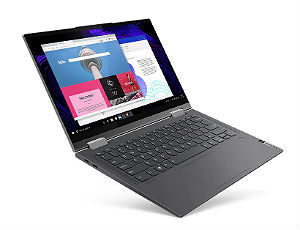 Meanwhile, Lenovo’s first traditional laptop PC with 5G connectivity won’t be its high-end commercial ThinkPad. The Lenovo Flex 5G will be marketed as a premium consumer laptop, available directly through retail and IT channels.

“I think the key there was just again, adaptability inside the in the consumer market,” Lenovo’s Cato said. “As we see more opportunities and more carriers offering 5G, it will start to bleed into the commercial market as well.”

Pund-IT’s King believes commercial and business users are the most likely early buyers of laptops that are 5G capable.

“Though a lot of the hype around 5G focuses on entertainment and gaming, certain classes of business users will also welcome more robust network performance and have the financial resources to pay for it,” King said. “Additionally, the new Dell Latitude 9510 offers an LTE option which underscores the company’s commitment to support customers who need to stay connected anytime and everywhere — so it fits seamlessly with adapting to evolving 5G availability.”

But King said he also can see why Lenovo would see a strong market for consumers.

“On Lenovo’s side, the focus on 5G support for consumers should be considered in light of the company’s strong position in China where the rollout of 5G is occurring faster and more broadly than it is elsewhere,” he said. “The Flex 5G reflects Lenovo’s understanding of the evolving needs and requirements of a substantial portion of its customer base.”