Atos, the global enterprise outsourcing and services provider, is entering 2020 by accelerating its focus on digital business transformation opportunities using Google Cloud Platform (GCP) as its primary application hosting platform. In its latest bid to boost that effort, Atos is deepening its bench of developers and consultants with plans to acquire Maven Wave, a Google Cloud premier partner.

The deal to acquire Maven Wave, announced last month for an undisclosed amount and set to close this quarter, aims to expand Atos’ competency around delivering cloud-native, serverless applications managed in Kubernetes environments hosted in GCP. Atos, a global IT consulting and outsourcing services firm with 110,000 employees and a presence in 73 countries, is headquartered in Paris. The acquisition of Chicago-based Maven Wave will extend Atos presence in the U.S. where it is seeing high demand for application modernization services to enable digital business initiatives. Atos kicked its U.S. expansion into gear in 2018 with its $3.4 billion acquisition of digital services provider Syntel, based in Troy, Michigan.

While Atos has partnerships with all of the major public cloud service providers, the company in 2018 decided to make GCP its preferred platform for customers seeking to outsource their digital business initiatives. 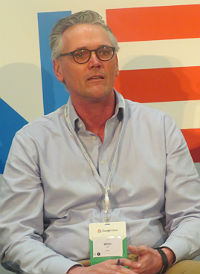 “We use the Google Cloud Platform as an engine, a delivery mechanism, for our outsourcing services; they no longer come from our own data center, which is obviously a very nice first step to make,” said Wim Los, the senior VP overseeing Atos’ alliance with Google, in an interview with Channel Futures.

“Looking forward, the next step obviously is to become more cloud-native in everything that we do,” Los added. “The demand in the market for that is growing so fast that we cannot keep up with it. Our view is that if we will have additional resources coming in that will really help us to grab more market share and to grow faster.”

Los said Atos started seeking partnerships or acquisition targets that could help fill that need, when it came upon Maven Wave. Asked if Atos is looking to acquire additional GCP partners, Los said that’s a possibility.

“We might; that’s for sure something we are open to,” he said. “Nothing cooking for the short term but definitely this is the path that we have to extend on. It could also be for multiple platforms. It doesn’t have to be exclusive.”

Maven Wave fits the bill for helping drive growth in 2020, he emphasized.

“In order to be able to scale out a cloud-based application platform and managing that, Kubernetes is a is a critical step,” he said.

Maven Wave has that expertise in the field, with about 100 people in India doing offshore application development work, he noted.

Atos, which touts its leadership in SAP HANA, application modernization and transformation, digital workplace IoT and analytics running in hybrid cloud environments, is also among the early testers of Google Anthos. Introduced last year, Google Anthos its multicloud hybrid platform that is Kubernetes-based — set to roll out this year.

Los said it has begun some implementations with the technical preview.

“Customers are very interested in using Anthos and we’re doing the first implementations with super results,” he said.

Previous Post The Next Generation of IPaaS Is a Business Performance Tool Next Post Edge Computing Architecture Is a Business Opportunity, Says Report