The latest iPad Pro lineup, which started shipping this week, is available with either 11-inch or 12.9-inch displays. Apple also plans to offer a new keyboard with includes a trackpad, though it won’t ship until May.

Apple’s new iPad Pros could be a welcome addition for partners looking to help customers with different client device options for the larger portion of their workforces that are now working at home as a result of the COVID-19 outbreak.

Since Apple launched its first iPad nearly a decade ago, the company has regarded its tablets as replacements for PCs in certain scenarios. Now, Apple believes its latest iPad lineup powered with its new A12Z Bionic processor, and new thermal architecture and controllers, will give it the kick to outperform “most” Windows PCs.

Described by Apple as its highest-performing iPad, the tablets’ new chip includes an 8-core GPU and 8-core CPU and what Apple calls a “neural engine” to enable advanced tasks such 4K video editing or working with 3-D CAD models. 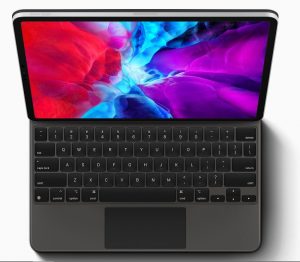 Some reports, however, raise the question as to how much of a boost the new processor offers over those that powered Apple’s previous lineup of iPad Pros, released two years ago. Citing several benchmarks, 9to5Mac reported that the new A 12Z Bionic chipset offers only a modest increase over the A12X chips powering the 2018 devices.

The new models come with upgraded Wi-Fi with support for dual band 802.11ax, or Wi-Fi 6, and models with optional cellular communications support gigabit-class LTE. As reported last fall, Apple and Cisco have worked together to optimize Wi-Fi 6 performance.

The new tablets come loaded with the new iPadOS 13.4, which includes the integrated trackpad support that will appear in Apple’s Magic Keyboard for iPad Pro in May, which will cost $279 for the 11-inch version and $329 for the 12.9-inch device.